The village of Sarmoli is located at 7500 feet on the slopes above Munsiari in the Kumaon Himalaya of Uttarakhand. It is a beautiful place that was earlier a pass through for tourists but now boasts of 15 homestays. This has been possible by the active involvement of Maati Sangathan members.

Maati is a group of local mountain women who have come together to work for the betterment and development of the people of the region in various aspects, ranging from crisis intervention, combating alcoholism, promoting responsible tourism to working towards environmentally sustainable development and generating employment opportunities for women.

Founded in the 1990s by local women along with Malika Virdi, Maati spoke up against the growing violence on women and came out to protest against liquor sales and its rampant use. Since then, they have been working towards a number of critical issues that impact the well-being and subsistence economies of forest dependent mountain communities. 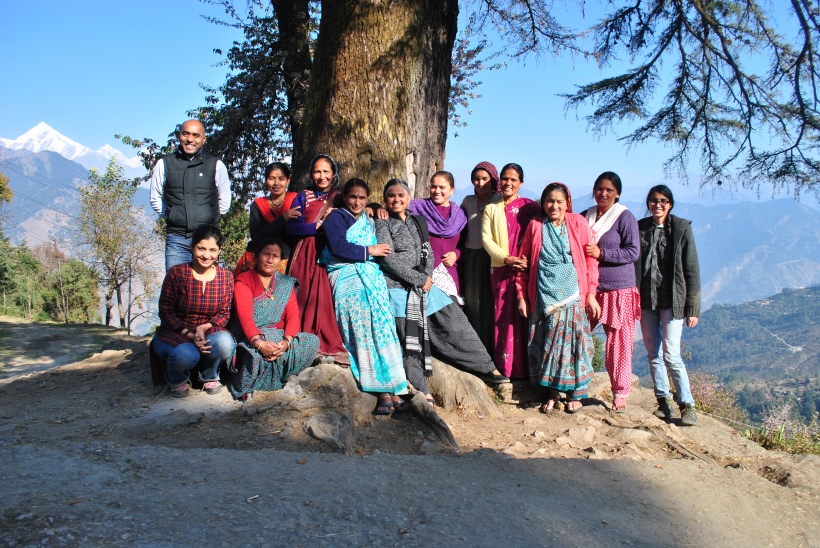 Our team with the women of Maati Sangathan

Maati has laid stress on livelihood support for women in order to empower them. They have found out means to earn, through selling their agricultural produce like rajma and homemade snacks, starting homestays and tour guide programmes, and creating a market for their handicrafts including carpets, rugs, blankets, sweaters, etc. All the Maati members are farmers themselves and they grow local produce on their farms. At Original Indian Table, we procure a variety of products from them, especially the different kinds of rajma and Himalayan herbs, which taste delightful owing to the efforts these women have put in and also due to the agro-climatic conditions at high altitudes.

In 2003, after being elected as the Sarpanch of the village Van Panchayat (Forest Commons), Malika along with the women of the Sangathan  started taking up the responsibility of their forests by regular afforestation and structured the use of the forest’s produce like grass, wood and leaves.

In the realm of environmentally sustainable development, Maati is contributing by encouraging the use of solar lanterns and organic seeds.  They also oppose destruction in the name of development, that is, large hydrological projects that will adversely impact the livelihood of the people and ecology of the region.

Maati has set a benchmark for women development in the hills where women were earlier not involved in any public matters. They have made a lot of achievements and are right on the road to development, in pace with nature.  Maati signifies a rural transformation that empowers women as well as is ecologically sensitive.

One thought on “Maati Sangathan- Empowering women at a height of 7500 feet!”